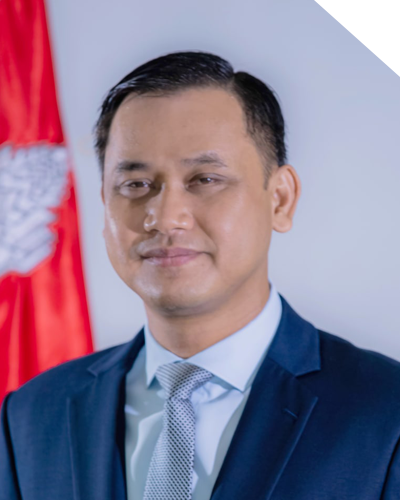 Secretary of State of the Ministry of Post and Telecommunications

Mam Amnot earned his Master’s degree in Social Science (Economics) and PhD degree in Agricultural Economics from Iwate University of Japan in 2005 and 2008, respectively. He has been the Secretary of State of the Ministry of Post and Telecommunications (MPTC) since 2021. In his capacity as the Secretary of State, he has been appointed to head the Postal Working Group of the MPTC and chair of the board of directors of the Cambodia Post, a public enterprise and a designated postal operator in the Kingdom of Cambodia. Before his appointment to the post at the MPTC, he was an advisor to Samdech Vibol Panha Sok An – former Deputy Prime Minister, Minister in charge of the Office of the Council of Ministers; the Director of ASEAN Department of the Office of the Council of Ministers; a member of board of directors of the National Social Security Fund; and the Sectary of Sate of the Ministry of Agriculture, Forestry and Fisheries (MAFF) from 2013-2021. At MAFF, he had oversight of the Department of International Cooperation, Agricultural Information and Documentation Center, the Department of Planning and Statistics, and the General Department of Agriculture; of the formulation of agricultural extension policy in Cambodia; and of the design and implementation of MAFF’s projects, whose objectives were to promote agricultural extension, and improve agricultural productivity and diversification of income sources of rural households in Cambodia. He was also the co-chair of the National Steering Committee of a number of projects and programs under MAFF.